Brought to you by:

Cornwall Air Ambulance was tasked to 1,061 missions last year, bringing vital emergency medical treatment in minutes to patients across Cornwall and the Isles of Scilly. The charity relies on the generosity of supporters to fund these lifesaving missions.

Taking to the skies in 1987, Cornwall Air Ambulance was the first air ambulance in the UK. It has now completed more than 29,000 missions, saving countless lives.

Cornwall Air Ambulance is on scene on average in just 12 minutes in mainland Cornwall and less than 30 minutes on the Isles of Scilly. The paramedic aircrew provide pre-hospital critical care at the scene of the incident and can go on to fly the patient to specialist hospital units in Cornwall, Devon or Bristol and even as far as Swansea.

For the half a million people who call Cornwall home, as well as the millions who visit the county, Cornwall Air Ambulance is a reassuring presence, and it’s all thanks to the support of people like you. 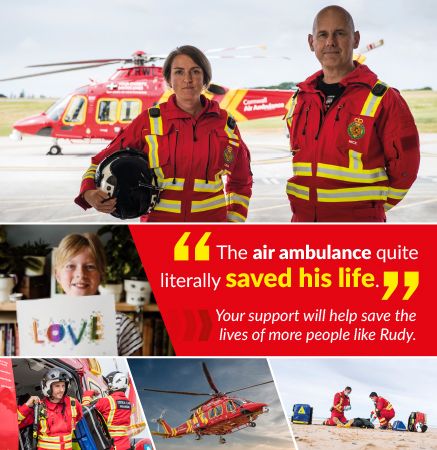